Manhattan Trembles after the Trump Win

Heard on the John Batchelor Show

END_OF_DOCUMENT_TOKEN_TO_BE_REPLACED

Was it just me or did anyone else think the hammering of Amy Klobuchar over forgetting the name of Mexico;’s president by Vanessa Hauc was way over the top?

Breaking via NYT: Intel officials warned House lawmakers last week that Russia was interfering in the 2020 campaign to try to get Trump re-elected, five people familiar with the matter said. That angered Trump, who complained Dems would use it against him. https://t.co/OxTKMY3WPs

@BullsBearsFBN @zacharykarabell @lizpeek @GaryKaltbaum @garybsmith @DavidAsmanfox We have a fulfillment center right down the street… Alot of jobs for people that were unemployed… And they in return spend that money in our area and it works well.. 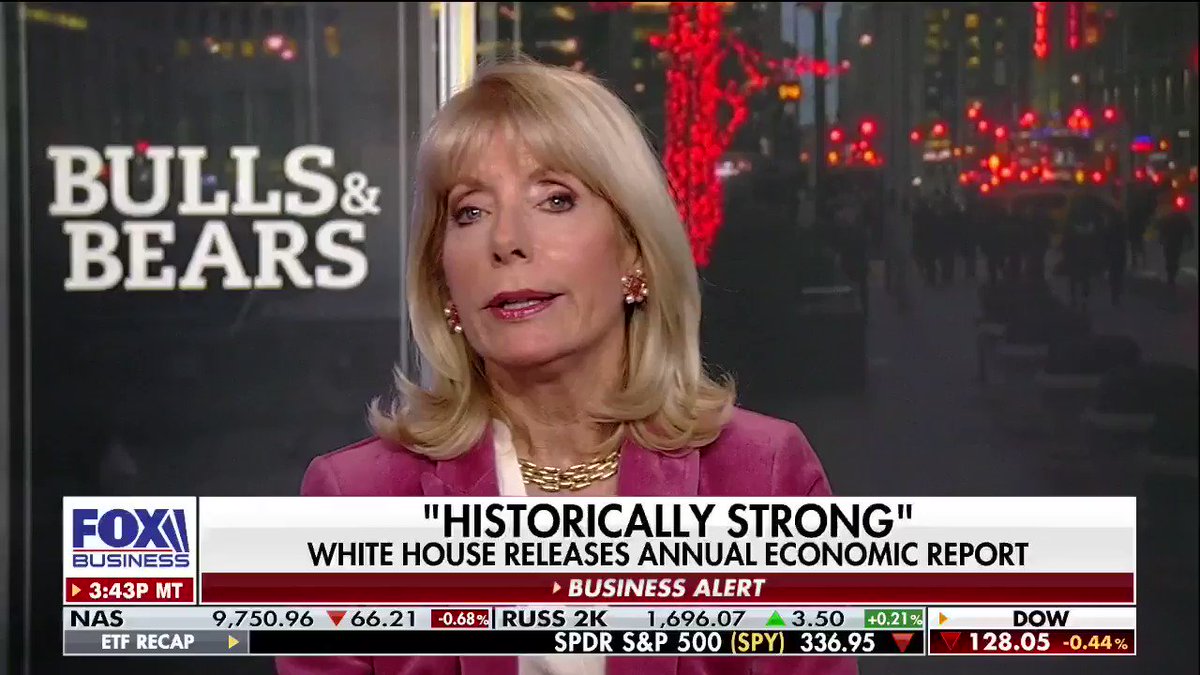 Of all the unorthodox moves made by President Trump, his most consequential has been breaking with the Chamber of Commerce and other business groups to confront China. Nearly everyone has bashed his efforts to reset out trading relationship with Beijing, which has now of course gone way beyond a tussle over tariffs and duties. Under Trump, the US has challenged China’s growing aggression in the South China Sea, its cyberespionage, theft of intellectual property and so much more. It had to happen. China is not a growing nation eager to play by the rules. It is increasingly obvious that its leader President Xi is conducting a criminal enterprise the likes of which the world has never seen.
Trump has put the economy — and his own reelection — at risk to temper Beijing’s ambitions. That should earn him plaudits, but it won’t. Big Business is not happy he rained on their party, even as they increasingly confront the real cost of depending on China for sourcing and growth. Workers know what is at stake; they know they finally have a president willing to fight for them. Those are the folks who will reelect Trump this fall.
Liz Peek: Trump’s biggest legacy is risking reelection to expose corrupt China
By Liz Peek | Fox News Monday February 18,2020

How bad is China? So bad that they are “disappearing” those telling the truth about the coronavirus. So bad that their leader, President Xi Jinping, apparently knew about the disease weeks before he fessed up to the public, possibly delaying the creation of treatments and jeopardizing millions.So bad that President Trump chose to risk his own reelection by confronting Beijing.Donald Trump’s most enduring legacy may not be a more secure southern border or lower taxes. Those accomplishments will be thrown over in a jiffy once Democrats retake the White House, as they one day will.No, history will best remember Donald Trump as the president who forced the world to acknowledge that China’s government is a criminal enterprise.As the coronavirus rolls on, sickening and killing thousands, we are reminded anew of the threat posed by China’s corruption. It has become clear that Beijing lied about the extent and the contagious nature of the disease, allowing hundreds of thousands of travelers to spread the virus well after it had been diagnosed.More recently, it has emerged that citizen journalists bold enough to expose horrifying scenes of dead bodies stacked in vans or desperate lines of patients seeking treatment have vanished.Governments trying to protect their citizens are attempting to sort Chinese fact from fiction. Thankfully, the blinders are off, in part because of Trump’s willingness to call out Beijing’s duplicity on trade and other activities, including their breathtaking theft of America’s creative output.He has confronted not only China’s unfair trade practices, but also their cyber espionage, their infiltration of American research universities, their multiple breaches of international agreements (WTO, North Korea sanctions etc.) and so much more.Trump has revealed China’s profound dishonesty, which other world leaders, hungry to access China’s huge market, have been reluctant to do. His campaign has resulted in a marked change in Americans’ attitudes towards Beijing. Last year, according to Pew research, some 60 percent of the country had an unfavorable view of China, up from roughly 38 percent a decade ago, and 47 percent in 2018.This is no small feat. As the president took on China, he risked his most compelling reelection advantage: a strong economy. For the past three years, he came under widespread attack for placing tariffs on Chinese imports, with Corporate America and the media warning that the trade war would hurt consumers and throw the United States into recession.Indeed, the president’s efforts to right the wrongs of decades have caused some slowing in our growth, especially in manufacturing. This has been expensive, not only to the country, but also to the president.Immediately following his election in 2016, the United States enjoyed a surge in optimism – among consumers and business leaders. Buoyed by lower taxes and less onerous regulation, CEOs hiked spending and hiring. Business investment increased at a rate not seen in years, leading overall GDP growth to exceed 3 percent by the middle of 2018.Since then, the rate of economic expansion slowed, thanks to unwarranted rate hikes from the Federal Reserve, and to a slowdown in business spending. CEOs grew nervous about the impact of the trade war and cut back.Notwithstanding the damage that the trade challenge inflicted on the economy, Trump and his negotiators persevered, finally inking a “phase one” deal late last year. The agreement contains new protections of patents and trade secrets and prohibits forced technology transfers, with clear enforcement mechanisms. The deal addressed many of China’s misdeeds; it was a victory.It was perhaps Trump’s most consequential victory to date. With the emergence of the Mao-like President Xi, the growth of China’s economy, its giant military spending, its increasing aggression and its vast ambition, outlined in its Belt and Road initiative, the United States had, eventually, to set limits on Beijing.It is not as though Trump had no choice. His predecessors simply ignored China’s transgressions; he chose not to. China did not suddenly become a rogue state; it has been lying, stealing us blind and attacking us for decades.After all, it was well known that China orchestrated the hack of the Office of Personnel Management in 2014, the single biggest theft of personal data in our country’s history. Information on millions of Americans was siphoned off, including many with high-level security clearances.In that same year, a grand jury in Pennsylvania indicted five Chinese members of a military-linked cybercrime unit for stealing trade secrets from Westinghouse and other American companies.In 2013, Dennis Blair and Jon Huntsman were charged with reviewing widespread stealing of American intellectual property; their report cited China as the principal bad actor and estimated the annual cost of IP theft at more than $300 billion annually.In a 2017 update, the two noted that, notwithstanding ongoing losses of some $225 billion to $600 billion each year, “the executive branch took a limited number of actions” and American businesses did little more than play defense.Why were U.S. leaders so ready to ignore China’s misdeeds? As globalization spread, Big Business depended on supply chains in China to lower costs and compete with international rivals. Also, President Barack Obama desperately wanted their participation in the Paris Climate Accord. Even though Beijing’s promises were practically meaningless, Obama could hail the agreement as a diplomatic breakthrough, claims that were magnified by a compliant media.Our business and political leaders were happy to deal with the devil.Today, as the coronavirus wreaks havoc on businesses overly dependent on Chinese supply chains, the cost of that naivete is becoming clear. Companies are scrambling to diversify their manufacturing sources, moving operations to Vietnam, Thailand and elsewhere. Some made the move in response to Trump’s trade war; some are just now pursuing alternative sources to escape the virus-linked lockdown of Chinese factories.This is a welcome turn of events and will have long-lasting repercussions, including slowing China’s ascent. The world can thank President Trump.Please share: www.foxnews.com/opinion/liz-peek-trumps-biggest-legacy-is-risking-reelection-to-expose-corrupt-china … See MoreSee Less

History will best remember Trump as the president who forced the world to acknowledge that China’s government is a criminal enterprise.

Yes, that is the ONLY reason that Gloomberg is going after Trump..Messing with his rice bowl..

I wish I could put pen to paper like LP can. Refreshing to see someone still can.

He thinks long term and other presidents just think about the next election.

No other Democrat or Republican would’ve stood up to China! Trump 2020 🇺🇸

Something went very seriously wrong for Democrats in Iowa: they didn’t get the turnout they expected, and especially in rural districts that once voted for Obama, and then switched to Trump. Bernie Sanders says Dems are going to win by attracting biggest-ever turnout, but what are they doing to create that?
Their approach? Vowing to double down on more investigations, even as Russiagate and impeachment failed to win over the public. There are many lawsuits and court challenges to every aspect of Trump’s life underway – which will only serve to rev up his base, just as impeachment has done. Dems need to find another approach – like maybe policies that could make America more prosperous.
www.foxnews.com/opinion/liz-peek-democrats-gone-mad-trump-investigations-and-clueless-candidates … See MoreSee Less

Can’t they see the endless attacks on the president have boosted his approval ratings, brought in a gusher of campaign cash and charged up his base?

Brilliant analysis,as always. I look forward to listen to you on Mr. B’s podcast soon.

No one human could possibly as bad as the Democrats & Media are trying to make Trump out to be. Maybe they should try working WITH him & see if that helps..

Nancy Pelosi is a disgrace. Her behavior at the State of the Union Speech was offensive to the office of the president and to Americans. Her rage that her partisan impeachment gambit has failed, her anxiety about the Iowa calamity and success of Bernie Sanders, the rising approval ratings for President Trump- have seemingly driven the House Speaker over the edge.
Her problem is this: President Trump is winning- with the economy, and with voters.
thehill.com/opinion/white-house/481571-trump-eviscerates-democrats-in-state-of-the-union-speech-p… … See MoreSee Less

Democrats, led by Pelosi, just hate that President Donald Trump has a great story to tell, and that he told it brilliantly.

Yes, she needs to save that silly behavior for her husband & act like a professional at work..She speaks of a woman president & then she behaves like this..OUTRAGEOUS..Thanks for setting the woman's movement back Nancy..

Americans want a president that makes them feel safe and creates a environment for opportunity, Trump does that.

Never stand in the way of your enemy destroying themselves.

She needs to be censured and made to step down!!! I tuned in li ast night to watch my president give the state of the union. I did not tube in to watch Nancy have a temper tantrum!!!! What a complete disgrace she is to this country!!!

Pelosi/Dems/MSM are a TOTAL disgrace to America. Mark Meadows: "Pelosi ripped up Trump's speech the way she's ripping apart America" Best POTUS ever & best State of Union Address ever. WTG Trump has accomplished more in 3 yrs than the last 2 admins did in 16 yrs combined!. #4MoreYrs Pelosi ripping up Trumps speech just ie Schiff, Pelosi, Dems & MSM have been trying to rip apart America for the last 3 years." SHAME ON PELOSI & THE SOCIALIST DEMS. Pelosi just ripped up: One of our last surviving Tuskegee Airmen. The survival of a child born at 21 weeks. The mourning families of Rocky Jones and Kayla Mueller. A service member's reunion with his family," the White House said in a tweet. "That's her legacy."

That was a signed document that gets sent to the National archives. She’s a complete idiot!