Are Democrats serious about confronting the impending collapse of Social Security and Medicare? It sure doesn’t seem so.

Instead of focusing on the looming bankruptcy of these programs, Democrats are pushing to spend $4-$5 trillion on a progressive wish-list of expensive new federal giveaways. Perhaps they believe that promising voters free college, free child care, free elder care and so much more will distract them from realizing that our most important safety nets are falling into disrepair.

Moreover, President Biden and congressional Democrats want to significantly hike taxes to pay for shiny new entitlements. But taxpayers are already facing big hits just to maintain the ones we already have.

This week, the trustees of the Social Security and Medicare programs released their annual reports; the news is not good.

The bottom line: Both funds are running out of money, faster than expected. Both Medicare and Social Security will need to be propped up, the sooner the better. Specifically:

The date of projected insolvency for these entitlements moved closer over the past year; the proposed remedies from the Committee for a Responsible Federal Budget (CRFB) become more draconian as time goes on.

In other words, the longer we wait to shore up these programs, the stiffer the increases in taxes will have to be or the fewer the number of retirees who can count on receiving benefits.

To achieve long-term solvency for Social Security, the CRFB advises, would require a 27 percent hike in the payroll tax today; if legislators don’t act until 2034, when the program will be broke, that payroll tax hike will be 34 percent.

That is, even if Congress acts today, the increase in the deduction from a worker’s wages will be more than three percentage points; if they wait, it will be over 4 percentage points. That’s a major hit to paychecks.

The other approach is to cut retiree benefits. The CRFB estimates that, “Social Security solvency could be achieved with a 21 percent across-the-board benefit cut today, which would rise to 26 percent by 2034. Cuts to new beneficiaries would need to be 25 percent today,” but “even eliminating benefits for new beneficiaries in 2034 would not be enough to avoid insolvency.”

The alarming reports were greeted with silence from the left, including from Sen. Bernie Sanders (I-Vt.), head of the Budget Committee and author of the $3.5 trillion “social infrastructure” bill that Democrats hope to pass via reconciliation. Apparently, for Sanders and his progressive colleagues, new programs are better than the old ones, even though most Americans rely on Social Security and Medicare.

In fact, in July, Sanders and Sen. Chris Van Hollen (D-Md.) introduced a billthat would exacerbate Social Security’s financial problems. According to the Maryland senator’s website, the proposed legislation would “extend Social Security benefits to age 26 for students who are survivors, children of disabled workers, and eligible grandchildren of retired workers.”

While it is true that benefits are paid to children or workers who have died young or who are disabled, Social Security was not intended to support young people through college, as is the purpose of Sanders’s and Van Hollen’s bill. Given the current projections reported by the trustees, adding to the demands on the program’s finances is reckless.

In the same vein, Sanders wants to lower the eligibility age for Medicare from 65 to 60 or 55 and to expand coverage to include dental and vision outlays. He proposes paying for these changes by allowing Medicare to negotiate prices with drug companies.

Studies have shown that lowering the eligibility age to 60 would cost as much as $100 billion per year, while a 2019 plan to add vision and dental coverage was estimated to cost $350 over 10 years. Estimates of savings from Medicare negotiating drug prices – totally some $500 trillion over 10 years – do not come close to covering the added costs.

Earlier this year President Biden fired Andrew Saul, a business executive who was commissioner of the Social Security Administration. Saul worked under both Republican and Democratic presidents, initially as chair of the Federal Thrift Investment Board, where he modernized the organization that provides retirement savings plans for military and federal employees. The Republican got such high marks for his stewardship that the federal employees unions backed his reappointment by President Obama.

Biden fired Saul not because he was doing a bad job, but apparently because he was doing a good job cutting down on fraud and waste in an effort to make the Social Security Administration more efficient, even as he improved services to clients. Biden has not nominated a successor to Saul, despite Social Security being the largest single item in our federal budget. And that is how serious Democrats are. 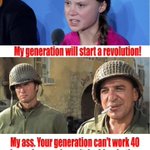